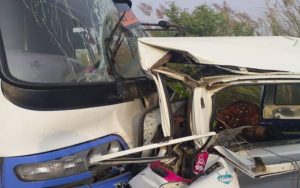 Aslam(94 news)Aslam driver collided with a bus and a van on a road in Gujarat 6 While students were killed 4 People are said to be injured, killed and injured were shifted to hospital.

According to the students about the van driver causing the accident hit the bus coming from the opposite direction it was going to college and 6 Students were killed.

According to rescue officials Gujarat rudprpys accident, killed and injured were shifted to hospital, injured 3 The critical condition is shifted to Sargodha.

Zainab was brutal killer of young ltkadya execute Imran, over the body ursaky