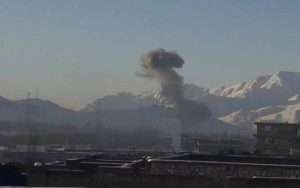 Cable (94news) I have been an attack by the Taliban, the Afghan intelligence agency NDS 126 Personnel were killed.

The Afghan Defense Ministry senior official in the Afghan province of Wardak Taliban targeted the NDS compound. He said that in an explosion in the compound 126 Were killed in 8 Special commandos are included.

Security official said Monday that any attackers rammed a vehicle into NDS Training Center in the city. As soon as the explosion happened 2 Gunmen entered the training center and before the response they had piled several soldiers.

The Afghan defense ministry has been attacked by the Taliban who used a stolen car to attack Afghan forces so they can easily pass on checkpoints. Maidan Wardak provincial council member said Hotak said the blast was so severe that the entire building was demolished Training Center.

The Taliban have also claimed responsibility for the attack and claimed that Special Forces attack Special Forces in the center 90 Killed and 100 Have been injured. The compound 200 From 250 Officers were deployed. Between Taliban fighters and Afghan forces 3 The clash lasted for hours.