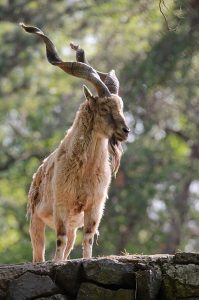 Chitral(94 news) A US citizen has been the national bird markhor in Chitral Pakistan.

Mohammad Idris has said Toshio left the hotel in the hunt for Kevin James on Wednesday, but there was a fire on militants into the air. After the stampede in the area and were able to get in markhors blink away the rare animals.

Remember that each year the national animal of Pakistan Trophy Hunting Scheme 12 The permit auctions that are KP, GB and divide the country. Last year the province received more than half a million dollars for the license fee. Trophy hunting of the amount of funding under the scheme 80 Per cent is spent on the welfare of the local population.

Officials say nine of the markhor was little markhors the squar in the province due to poaching decade. But that number has exceeded six thousand.

Some people are opposed to trophy hunting scheme of government. Trophy Hunting termed a genocide campaign against money markhors.

The last American hunter, James Kevin, male markhor hunting for a hundred and fifty thousand US dollars fee was half of that amount in the account. This was the largest amount in Rs two crore twenty lakh hy.kybr formed over many types of terrain Pakhtunkhwa Chitral, Kohistan, Northern areas, Gilgit-Baltistan, Kashmir and Pakistan's Balochistan province zrantzam Markhor are found.