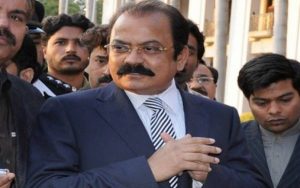 Rana Sanaullah said that JIT is made to take political revenge by the government. The Government of Pakistan Awami Tehreek (PAT) I made the JIT would hate for us to say PAT these models so that the tragedy was a crime no one in town has the legal status of JIT more often quoted Sanaullah JIT officers are said to have the honor and good reputation.

Sahiwal persons killed in the tragedy of the times:Former IG Motorway Cheema

Amir has rejected the offer, he married actress hanyh