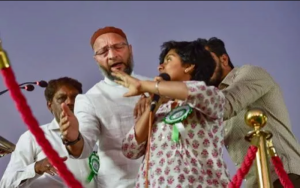 Bangalore (94 news) Hindu extremists held a rally against the controversial citizenship law in India has placed a "prize of Rs 10 lakh to Pakistan Zindabad" slogans of the girl's head.

19 Leona Amul year in the rally Thursday at Freedom Park in Bangalore had chanted 'Pakistan Zindabad, while the radical slogans in favor of Pakistan have been arrested and tried for treason against the court to 14 Fasting is sent to jail on judicial remand.

Leona radical slogans in favor of Pakistan Video Mardi worker Sanjeev Sri Ram Sena Hindu extremist organization after viral on his head 10 The prize is Rs. He said the video was shared on social media that the government would not have been any radical, if we were going to kill him and he will do it. 10 Million will be awarded.

Islamabad United won the toss and decided to bowl

University prufysrkutalbat were discharged from service on harassment