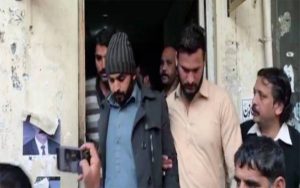 According to Samaa TV cameraman gya.nuazsryf security of the two guards grftarnuaz violence against Sharif in Islamabad on the main court and guard counterpart Mohsen kukymrh man has been arrested on charges of violence Wajid, court accused is sent to jail on 14 days judicial remand. While the pre-arrest bail application security charge Shakoor have been issued at the request of the police nutszbhy hy.mlzman been filed.

Pakistan Cricket Board India 9 Million to pay the fine, he heard ICC decision