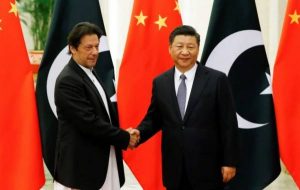 Islam Abad (94 news) China has been in the field to help the brotherly country of Pakistan and the international journal revealed that from China to Pakistan 2 Billion dollar loan which would be likely to reduce the pressure of external payments.

International journal Financial Times said in its report that China Pakistan 2 Billion dollar loan and the amount will be increased foreign exchange reserves, will support the value of money and the amount received from China has also reduced the pressure of external payments.

The suit also promises to Pakistan from Saudi Arabia have been received, while two billion tranche of one billion dollars of Saudi package is expected to meet in the middle of this month. Under the relief package to Saudi Arabia 2 Billion dollars has resulted in a significant increase in foreign exchange reserves.

The fire broke out at the party office,

He was demanding the resignation of KP Chief Minister of Sindh