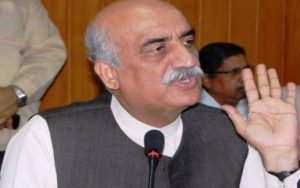 Sukkur (94news)PPP leader Khurshid Shah said that the government had to borrow PTI rykardturdyyy, say, people will come forward bgyrmlk believed to have committed suicide rather than loan borrower.

We politicians are the akrbry claims in the election, who is not tempted to take the concerns of ckrmyn krdardykhy bgyrnmayndun vote dyajatahy, service status, do not abuse policy, the name of the service Khursheed said while addressing the function, the current do not expect a job with the government, youth kuruzgarky name prdukadyagya, with opposition to the province, something dukahy people krnajnuby Punjab.

He said the PPP 4 came here to fight dictators, never asked anyone that his relationship with the party, to which it is able to serve a maximum of people, party kuphrbhy public ruzgarkadrdhutahy, we promise made in 2008 completed.

The life of civil society bnalyahy flock Khursheed said, hypocrisy that did not bulnahy, Prime Minister lies hrbd will answer in the coming parliament, passed five months, but the Prime Minister did not come to the parliament, he said that Imran Khan kuhrsurt alymh Khan property has dynahugy description.

Shah said that you had 30 pncrky that we will come to 60 puncture the open, now I have no committee to open constituency, despite a mandate, we will invite government work, said the government Just a debt to be concerned, he said that electricity, gas has increased petrol prices, were found in urea prices doubled, been an increase in drug prices, the government asks kutyarnhyn.

Request details of agencies to supply a million jobs

The PTI tainted his foot, alymh's Money Trail and helicopters to respond to cases of property: Hamza Shahbaz