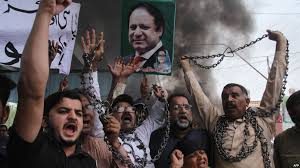 Dubai (94 news) September 11 death of Ms. Kalthoum nose has moved to the League, now spread smiles on faces that were in grief Mohammad Nawaz Sharif, Nawaz, Capt Safdar release the Leaguers. Now it was found to be less happy that the PML-Oct 15 (The) President, former Punjab Chief Minister Mian Mohammad Shahbaz Sharif's arrest was suffering from grief to grief again leaguers.

Court to CM 10 The case was remanded to