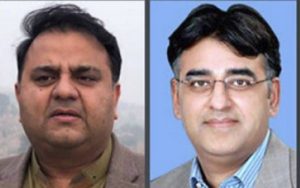 According to the Federal Cabinet and was the argument Asad Fawad Chaudhry Fawad Chaudhry offended when Assad was not an answer to the old party leadership and the two exchanged harsh sentences between federal ministers.

The Finance Minister is not given to complaining that the party was the appropriate response from the Information Fawad Chaudhry said I can not work on your recipe.

Earlier, Fawad Chaudhry Naeem had been literally War Special Assistant to Prime Minister on the issue of MD PTV of Pakistan, he said Fawad Chaudhry's resignation News were stashed.

The teacher was convicted of school safety, violence teacher, demanding to take notice of the Minister