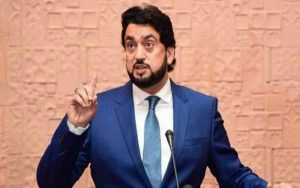 Shahryar Afridi came to participate in an event journalists surrounded him. Meanwhile, a journalist accused said 'your brother has happened over the earth, female nighat Afridi has accused them. Shahriar Shahriar Shahid Afridi Afridi moving quickly on this question. How can the minister saw the video and his colleagues surrounded the journalists behind.

The journalist did not answer the second question Shahryar Afridi stains. Reporters asked that your brother is being accused of that involvement. Shahryar Afridi has no answer.

Questions about charges of murder and possession of land, while pursuing the man's brother to Pakistan pic.twitter.com/KsrvO6XRzq