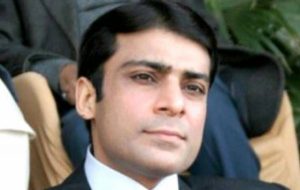 Lahore (94news) Punjab Assembly Opposition leader Hamza Shahbaz Sharif said that Imran Niazi has tainted his foot, how they are away from the opposition says the thieves and robbers, they would have to pay money Trail alymh's property, talk and not to kill shows, that if the opposition is prepared to stand trial for the country's development.

Imran Niazi has tainted his foot, how they are away from the opposition says the thieves and robbers, and they catch the thieves who cleaned his foot Talking to media in Lahore, according to Hamza said Shahbaz Sharif, alymh's property before the United Arab Emirates (UAE) Exit and now out in New Jersey, Imran Khan will give the money trail of alymh helicopter to the property and you will also respond to the case.

He is coming on the interests of the dispute in the House when the minister Abdul Razak Dawood part Dam in Mohmand, who was awarded the contract, it has no conflict of interest. You 1400 Billion rupee loan from the State Bank while you take the loan that they say, they will apologize to the board the day is coming when people Niazi's container and again I was lying.

He said that there is a double standard of accountability in the country. 22 Cr is an insult to the people, Sharif against the clear bankrupt and our lap to prove corruption today, just as Pakistan will not run and Imran Niazi conscious that runs the country from hitting the talk but if my direction right we are ready to support the government for the development of the nation.

He added that the issues remain unchanged in the province, local bodies are not getting the funds while the government understand how to fix the economy that are not coming.

PTI had rykardturdyyy borrower, they would have committed suicide rather than loans, Khursheed Shah