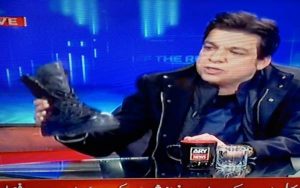 Responding to this the anchor Rauf discuss efforts said that the minister was must be dismissed placed live boot in front of the entire nation and has raised the questions on the company's reputation is fun to Ben for two weeks and save it Is. I send three letters to the media ask advice for the minister two weeks later called nation.

The anchor is applied 60 days ban on Kashif Abbasi Program. But only got banned for two weeks Faisal uauda.

General ISPR Major General babraftkardy set, who are they?

General must understand that those who celebrate the departure of President Asif Ghafoor? No discount will fix.