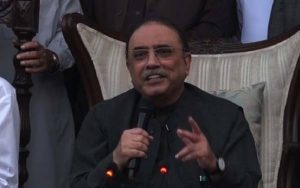 Khan put Sixer on former President Asif Ali Zardari said. I practically can not be dragged any. I do not believe that the Prime Minister authorized, Imran Khan slyktd tend to blame themselves and others. They were also like Shaukat Aziz, but he knew something about the economy, but Khan does not know anything.

He has before him 12 Years in jail, prison, Khan had cut? Fake accounts of the case in court, if the case went to trial if the Sindh Islamabad Why?

The former president said the new elections, but still can not give the date. Exports in the 27 Billion was reached, where the president was going to come from our country. If these hurhyn tax receipts. Khan did not give any advice when they do, the stock market needs to be strengthened, Imran Khan Stock Exchange were at $ 50 billion comes out.

The PSL 8 Matches will be held in Pakistan: Wasim Akram