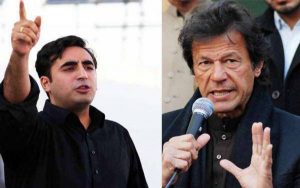 Islam Abad(94news) Minister in the PPP chairman of the Benazir Bhutto on Intuit's Imran Khan, Bilawal Bhutto Zardari in his message on the Twitter social networking site that slyktd He does not know human rights kyacyzhy, AEC name only opposition in El funny to oriented.

After Saudi Arabia, Qatar ready to be part of the pack

Uncheck the recent decisions of the House would have ended pen: Bilawal