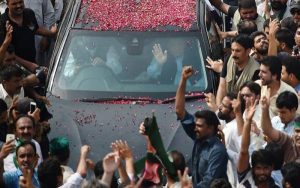 Islam Abad(94 news)There are references flagship alazyzyh and the decision will be taken shortly after announced, former Prime Minister Nawaz Sharif arrives in court with caravan, with Hamza shbazaursynyr leaders, arsdmlk court judge to his chamber.

According to the Court, Judge Mohammad Arshad Malik decision on alazyzyh and flagship references against former prime minister Nawaz Sharif told later, arrives in court with former Prime Minister Nawaz Sharif convoy, were strict security arrangements on the occasion, accountability is deployed heavy contingents of police outside the court, while Rangers contingents deployed within the judicial complex, stick-wielding police emergency force for the situation is deployed.