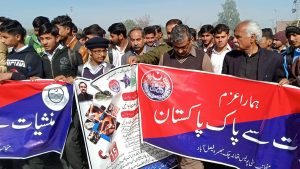 SHO Asif Nadeem and principal at the end of the walk mmtazalhsn end to the crimes to be set right and healthy society, drug-generation color can be saved for the younger generation to clean the society from killers he said the youth drug easy to get into but hard drug dehort special attention and supervision by parents of their children so that they may escape the curse.