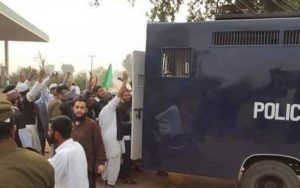 Rawalpindi (94news) Asia has demonstrated to the cause of Christ against dozens of leaders from various districts responded by free workers and police crackdown against activists arrested.

According to Asia took to the road to see the dead protesters rejected the review appeal against the decision to release him, while Kurds road block, police action against demonstrators in Shams Abad 30 Arrested several people that managed to escape, Attock, Jhelum, Chakwal different religious parties 68 Workers moved to detain the prison and police station, 26, 24 Jhelum, Attock, Rawalpindi 14 And was taken into custody carkarknun Chakwal. Also in Jhang police crackdown against the movement of workers and call up the night 20 Workers have been arrested.

Various schools in Toba Tek Singh 32 Scholars moved to an undisclosed location, arrested Jamaat Ahle Sunnat Pakistan are included in a district official, law and order situation to ensure the management of the measures taken in Asia. Islam in the case of decisions has been put on high alert in view of possible responses to risk, and heavy contingents of police personnel have been deployed in Faizabad Rangers.

Q: willing to split from the ministries, PTI upset