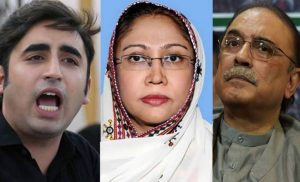 Islam Abad (94news) Federal Investigation Agency (FIA) Have seized the passport of the top leadership of the Pakistan People's Party.

According to Minister for Information and Broadcasting, said Fawad Chaudhry submitted that the Supreme Court has decided in the Cabinet meeting JIT report, including Asif Ali Zardari in 172 People named Exit Control List (AC Il) The cast.

Some of this announcement, Minister for Information and Broadcasting, while the FIA ​​PPP Chairman Bilawal Bhutto Zardari, co-chairman Asif Ali Zardari for passports confiscated and his sister, Faryal Talpur.

According to media reports, sources said that Benazir Bhutto, Asif Ali Zardari Faryal Talpur who had given their passports have been confiscated JIT.

All mini-marathon held in Faisalabad, Punjab