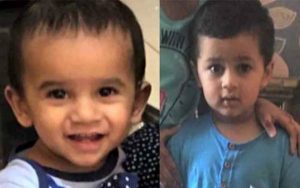 Karachi (94news) Health food meal was a case of two children's deaths no restaurant in Clifton 206/18 The children's father was killed in the coast station on behalf of Mohammad Ehsan.

According to the 2 Infant deaths were sealed over the management of the restaurant to the food warehouse at the restaurant by the administration itself mongering broken cell makers in gya.mqdmy employee arrested 322,272/34 Provisions have been included, Fir text in the cause of the children's father, Mohammad Ehsan has expressed doubts that the restaurant hazardous food and asyaءmyry son Ahmed and Mohammad's death, my wife and I's illness and his to be investigated.

The investigating agencies to the death of two innocent people in Karachi not reach a conclusion about sky.tftysy afsrkymtabq 300 People ate the same food in a restaurant, but the hospital did not say gya.mqdmy patient poison incident investigation officer the day that the restaurant Cell 2 hundred thousand 86 Thousands of Rs. About 300 People eat restaurant the day of the incident. The investigator checked all the hospitals of the city 300 I have not been hospitalized in a food puayzng.

Police are investigating whether other factors, including family affairs, so we did not seal the house, all the evidence collected, the officer said hyn.tftysy wait for the full recovery of the mother is being treated in hospital being, the mother of the importance of the progress which is expected.