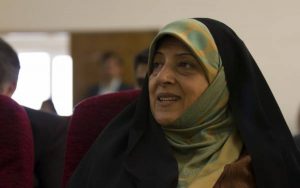 Iran's Vice President for Women and Family Affairs, according to Masuma is abtkar at the Corona virus. Which has been officially confirmed. It was also confirmed Iran's deputy health minister before Corona virus. Masuma abtkar 1979 During the revolution included the siege of the US embassy, ​​ability to speak English because they are known as 'English-language spokeswoman' in the Western world.

Corona virus 44 Reached countries, head of the WHO had issued count data