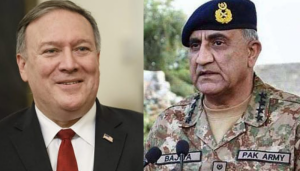 According to US Secretary of State Mike Pompey's army chief Qamar telephone contact jauydbajuh Ltd and General Bajwa informed the US move to Qasim Sulaimani. Clinton said Iran vocational tense situation in the region, America will protect those installations, interests, personnel and partners. The security strategy are US interests in the region Pompey Mike told Army.

China also came in response to US attacks on Iraq

After the death of General Qasim Sulaimani war clouds began to hover in the region, Israel has stepped up security at the border