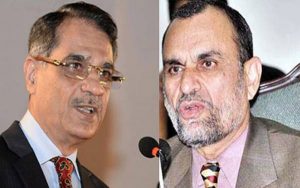 Islam Abad (94 news) IG Islamabad: Chief Justice of Pakistan in Islamabad discussed the case refused to accept any apology to the Federal Minister for Science and Technology Azam Swati.

IG Islamabad exchange has been rendered in the case of the JIT report Swati guilty during a hearing. Swati has misused the powers that Chief Justice read part of the JIT and told them 62 One can see the application work.

During the hearing, Chief Justice have brought your wife and children living in families kurustrm prblaya prison and said, we're fighting for your children and your pardon? Big people who can not be pardoned, there will be no forgiveness.

Note that in the case of poor families had been affected by IG exchange agreement with the Federal Minister for Science and Technology Azam Swati.

PTI Government ago 100 How much debt taken days?