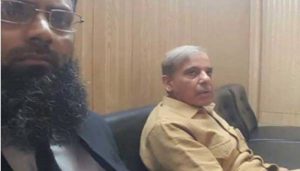 Lahore(94 news)Court verdict on the application of the 15-day physical remand of grftarsabq CM in Ashiana Housing scam, the Court of Justice Najam ul Hassan, former Punjab chief minister 10 On day remand of the case.

That ordered inquiry into all allegations bnyadhyn, I kudmaamly, Shahbaz Sharif said that every penny of the nation tutrqyaty tasks bcatarha, been rewarding verse save money, and said that I am the national Servant of Jehovah said former Chief Minister of Punjab, in Orange line train project in his sleep and health damaged, police said. 75 The billion rescue, night work and public service, former Chief Minister said that corruption is not a penny farthing, the case has been made on political grounds, he said that the suspects NAB pkralykn hands covering their husbands.

Sharif's lawyer argued that while Amjad Pervaiz Chaudhry Latif mfrurhyn, a case in a case of anti-corruption 90 Crore were received, Chaudhry Latif Company blacklisted in one case.

The court decision on completion of arguments, counsel for NAB prosecutor and former Punjab chief minister Shahbaz Sharif to tell the 10 On day remand of the case.