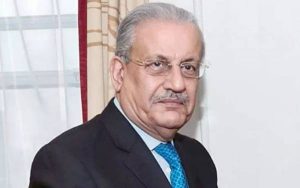 According to Pakistan, Senator Raza Rabbani of the Pakistan People's Party said while responding to the decision to approach the IMF on behalf of the federal government decided to IMF and took a U-turn, Finance Minister M to F first was assured of the confidence, the IMF condemned the government's move to approach the work, will have the burden of inflation on ordinary poor government policies.

"The stock market crash, was" of $ 135, synyrshafy Ansar Abbasi